The Mission, The Method, The Music, The Man

The Mission
After directing the same church orchestra for over 30 years, Jerry has felt a burning desire to share his talent and heart with a hurting world in the throes of crisis. His passion is to use music to rekindle that spark of joy . . . and to inspire hope in the many who seem to see no light at the end of their tunnel. And so, with God’s thumb in his back he’s bringing a wealth of experience as a recording artist, conductor, composer, arranger and pianist . . . to the concert stage and worship scene.

Since losing his first wife to cancer, Jerry married Rachel and, together, they are on a mission that has their arms wrapped around the world – particularly Africa where, with every opportunity, Jerry shares his piano concert ministry. Rachel’s particular calling is to develop peer groups to deal with the huge AIDS pandemic in Africa. The Nelson’s concert ministry on the home front, is the primary means of support for their mission outreach.

There are three ways a church can utilize Jerry’s God-given talents:

The Typical Concert is the first option. Being about 85% music, his concerts are both inspirational and entertaining, blending a wide spectrum of styles with anecdotes and illustrations stemming from many life experiences, and accented by moments of humor.

The Worship Service is a second option. Often, just 15 or 20 minutes of music can prepare an audience for hearing the Word using a combination of hymns and worship choruses. In other settings, with 30 or 40 minutes, it would include leading the audience in the worship experience using hymns and / or worship choruses drawn from CCLI’s top 25 list. In other settings he’s invited to take the whole service but without forfeiting the sharing of the Word. Jerry’s approach to worship, typically threads Scripture, personal sharing and congregational worship through his piano selections in a seamless flow.

Jerry has a way of weaving together a tapestry of music, Scripture and “five-minute windows” from his personal journey with God. You get the sense that you’ve truly worshipped . . . but without preaching. Never controversial – but always challenging and thought provoking.

The “Symphony of Love” is an exciting third option. It involves more of the local talent including the church choir, drawing from a menu of piano solo arrangements with choir. Using your church orchestra is an option. Other possibilities include local pianist(s) teaming up with Jerry – a great way to inspire young, and even more seasoned players.

The “Symphony of Love” is an incredible Outreach tool. If outreach is the intent, sizzling favorites like “Chariots of Fire” or “Rhapsody In Blue” combine well with some Classics but typically progressing toward a grand “How Great Thou Art” finale. Schedule it on a Friday, Saturday or Sunday night, perhaps combining churches together. It could even be a ticketed event in formal attire. For a closer look at the possibilities, you may purchase the “Symphony of Love” – a full concert DVD with all proceeds benefiting the Nelson’s mission efforts in Africa.

Two decades ago Jerry built Eagles Nest Recording Studio in the heart of the Rockies. Under the inspiration of this setting, he has recorded every imaginable style of music. That variety has carried over into his concert ministry as Jerry has obviously discovered the rare secret of connecting with people at both ends of the age spectrum simultaneously – a rather formidable challenge.

Full Screen Video – Probably the most effective tool Jerry uses for capturing a broad audience, is his use of video. No longer a rush for those few seats with a look at the keyboard. Now everyone enjoys the view as he plays “in-sync” with the keyboard on the big screen. Very close shots of the orchestra will put you in the middle of a row of trombones. These close-ups are further enhanced by stunning videography from all around the world.

Styles running the Gamut – Typically Jerry includes, as you’d expect, majestic traditional hymn arrangements like “How Great Thou Art” or “A Mighty Fortress.” But he also has a very intuitive feel for jazz which he creatively applies to familiar spirituals and certain hymns. In addition, he rather seamlessly moves from a high-energy Hebraic style to, perhaps, a quiet sensitive rendition of “Jesus Paid It All.”

For many people, inspired Classical music becomes a worship experience. So Jerry typically includes a touch of Classics such as an excerpt from Tchaikovsky’s First Piano Concerto. Do you wonder if Classical music has universal appeal? Wonder no more. This piece, which he’s played on all six continents, often garners a standing ovation. The key, he’s discovered, is choosing well-recognized Classics that everyone can identify with, but having a good bit of flambuoyant energy.

Improv – Being a master of ‘improv,’ Jerry will often solicit audience favorites, spinning them into a creative medley that one might guess was pulled directly off of one of his dozen CDs. For some, this spontaneous moment is the peak of the concert or worship service.

Jerry resists the temptation to do “cookie-cutter” concerts because every audience is different. Different culture – different challenges – different demographics – unique tastes. Having performed in denominations from Baptist, Free Church, Nazarene, Seventh Day, Assembly and Covenant, to more liturgical churches such as Methodist, Lutheran and Presbyterian, once he gets a sense of the setting, he can develop a flow that fits that unique audience. For example, in one environment, he will bend toward Classics. In another, he’ll lean toward Country and Gospel, while in the next, Jazz appeals to their taste buds.

Novelty moments – In some settings where greater freedom is encouraged, he will perform his ‘round-the-world” variations on “Jesus Loves Me.” On one occasion in the Congo, he sensed a cold, extreme anti-American sentiment. So he pulled out a rousing rendition of “I’ll Fly Away” – upside-down on his back with arms crossed. It definitely broke the ice and virtually melted the crowd, opening their hearts to be receptive to the Word. His unbelievable arrangement of “Rejoice In the Lord, Always,” performed by six pianists on one keyboard, definitely grabs the attention of a crowd.

The journey that God seems to have carved out for Jerry Nelson, has certainly prepared him for today’s flourishing concert ministry. After a decade in public school music and an earned doctorate, Jerry was at a crossroads, having to choose between teaching college, playing piano with the Gaither Trio, or directing a church orchestra. As right as the first two options seemed, he chose the latter. That choice, however, did not in any way curtail his creative involvement on stage with other Christian artists such as Sandi Patti, the Gaithers and Ralph Carmichael. In piano concert, he has teamed up with such greats as Dino and Anthony Burger.

Having built Eagles Nest Studio, his two decades of recording in that inspirational Rocky Mountain setting was an incredible stroke of providence. It’s what not only equipped him to play in such a myriad of styles, but also gave him the tools to produce his own orchestra tracks – heard on every CD and in every concert. In fact, many of those sound tracks are now available on his Website along with his piano arrangements which are available to the public for the first time.

Not only pianists, but virtually every instrumentalist (trumpet, flute, violin, etc.) can secure arrangements and compatible accompaniment tracks. When the Japanese were just thinking about what to call Karaoke, Jerry was already doing it in the early 70’s. At that time he gave birth to Clarion Productions, introducing the concept of Accompaniment Tracks to the Christian world. Jerry’s son, Scott, has been its chief engineer and his photographer son, Brad, has added his creative genius to the layout and design of recorded product.

For Jerry, music came as naturally as walking. He started piano lessons at age seven; by age ten, and still barely able to reach the pedals, Jerry was designated pianist in a tiny Minnesota church. Directing its orchestra (of three players), it was a quantum leap, a few years later, to recording with the London Orchestra. Though composer of several dozen songs and musicals, he considers himself more of an “Arranger” with some 6,000 arrangements spanning a fulfilling career.

Well, you’ve met the man – to schedule Jerry for a concert or special event such as Christmas, Easter, Valentine’s Day, Fall kickoff, Banquet or Cruise or even a Concert / Hymn Sing, contact his office through the contact page. 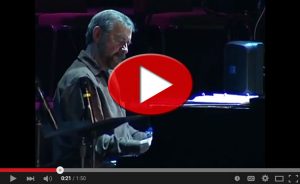 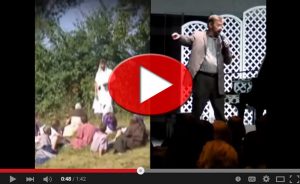 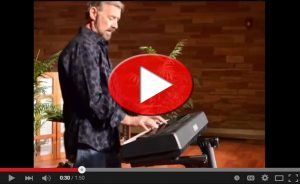 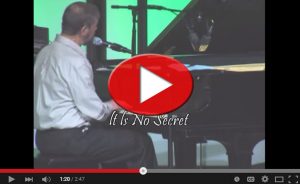 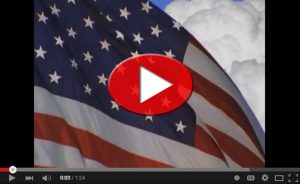 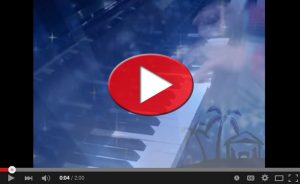 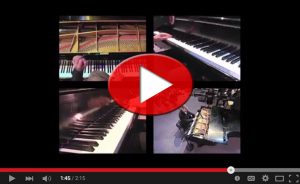 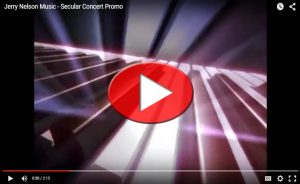